For a single file, you can do the change of EOL using notepad++.
Reference: http://psrdotcom.blogspot.in/2017/01/change-eol-end-of-line-character-from.html

But it would be difficult, if you want to do for multiple files in one go.

I have found a solution to update EOL for all files in the current directory.

Make sure that, working directory contains only the files which you want to change EOL.

Note: If not, copy the files to a new directory and change the EOL for all the files in that directory.

Please send your comments and feedback to psrdotcom@gmail.com
at January 20, 2017 No comments:

Today I will explain about updating/converting EOL for a single file from windows format to unix/linux format.

If you open the file in notepad++, you will be able to see the EOL character by following below steps:

To convert the EOL from Windows (CR LF) to Unix (LF), do the following 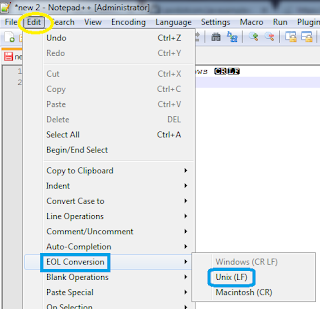 This type of conversion useful, when you are updating file in windows and using the same file in U/Linux environment.

For all files in one folder, you can follow my blog.
Reference: http://psrdotcom.blogspot.in/2017/01/change-eol-end-of-line-character-from_20.html

Send your comments and feedback to psrdotcom@gmail.com

Asus Zenfone 5 Clear Cache to speed up your phone

Today I will describe about clearing cache in Asus Zenfone 5 to speed up/boost your phone performance.

Please send your comments and review to psrdotcom@gmail.com

Please send your review and feedback to psrdotcom@gmail.com